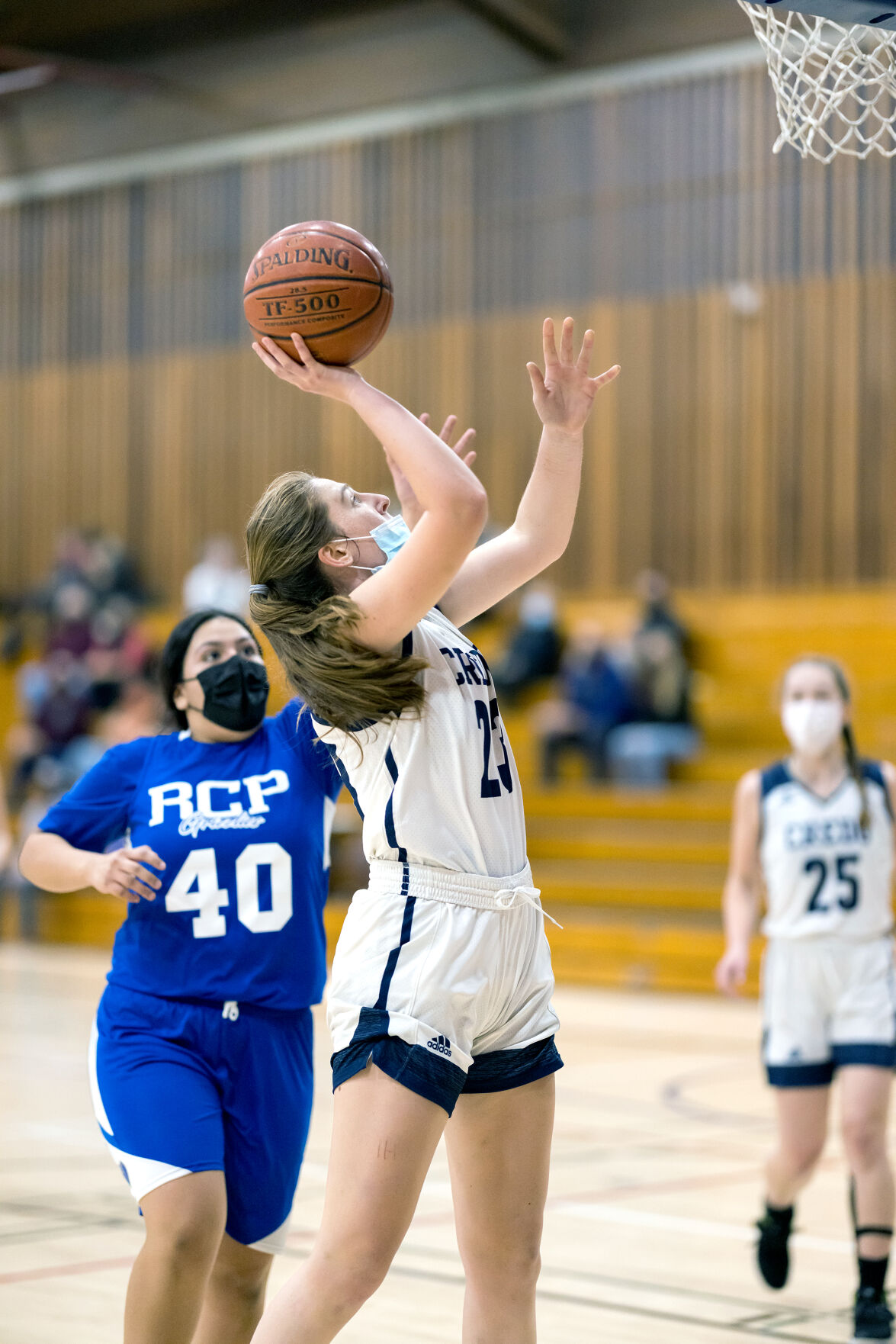 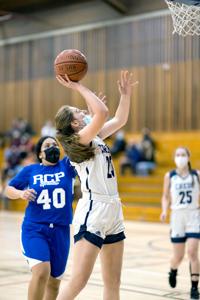 Credo forward, #23 Orieanna Vincent goes for 2 under the basket against Roseland Collegiate Prep. The Gryphon took the game 56-16. 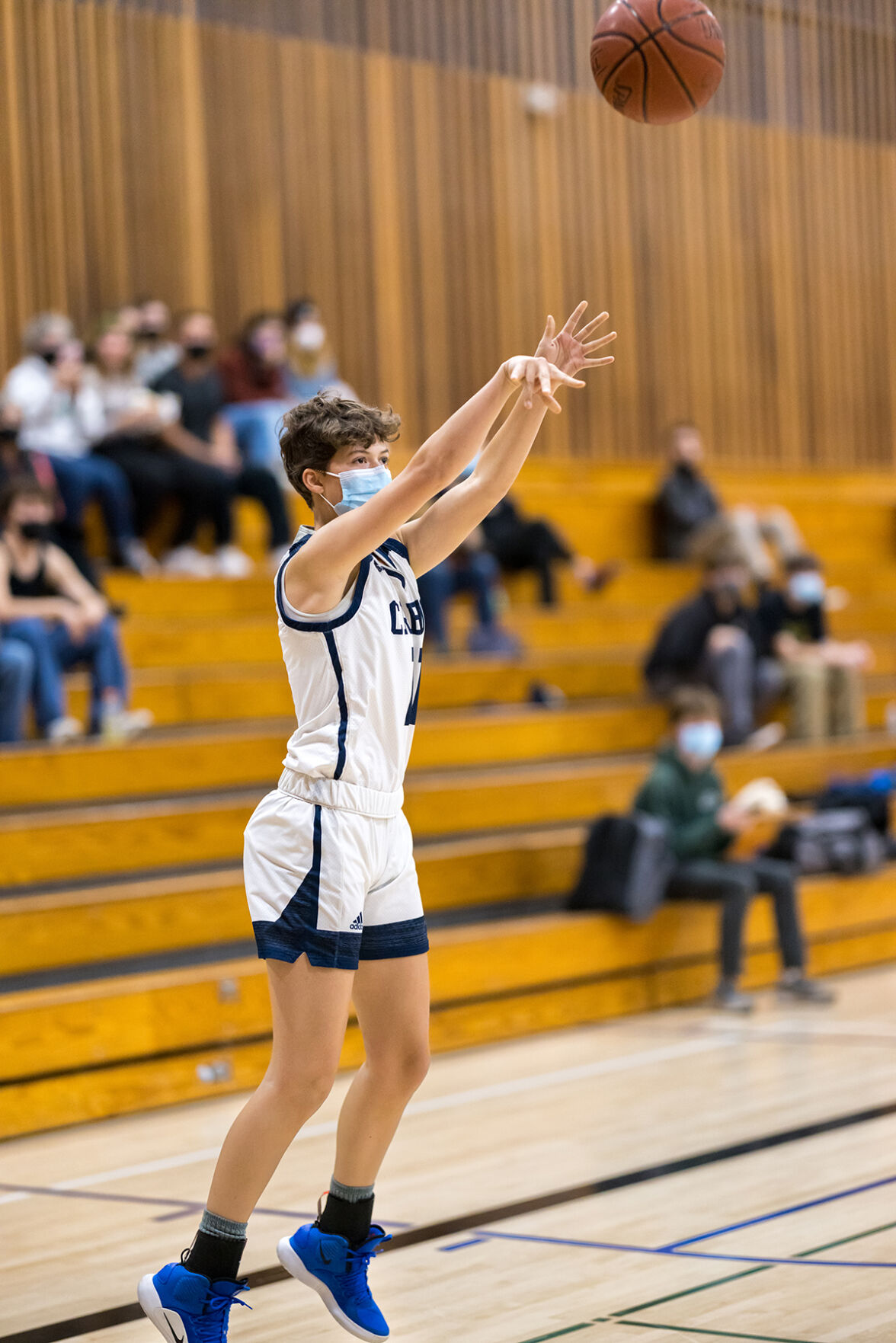 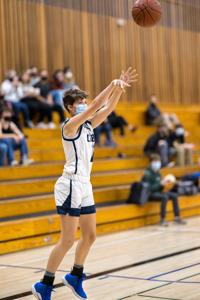 #11 Lhasa Gray, Gryphon Forward, shoots a 3-pointer in the 1st quarter of the game against Roseland Collegiate Prep. Credo won the game 56-16.

Credo forward, #23 Orieanna Vincent goes for 2 under the basket against Roseland Collegiate Prep. The Gryphon took the game 56-16.

#11 Lhasa Gray, Gryphon Forward, shoots a 3-pointer in the 1st quarter of the game against Roseland Collegiate Prep. Credo won the game 56-16.

2021 wasn’t kind to the Credo Girls Basketball team. For a team with only 8 players, any bit of adversity would be difficult to overcome. First off was Covid, the last two years making it difficult for the girls to really play together and practice, second was injuries and third was the girls needing time to grow as a team during a difficult preseason schedule. Head Coach John Behrs knew the season would start out a little rough, but believes his girls are starting to come together and will make a late season run assuming no more adversity hits them.

“We’ve had two girls miss games with concussions, then a couple were injured so we’ve had a hard time getting going,” Behrs said. “We started out with some really tough teams in a tournament at Maria Carrillo. Playing Division 1 and 2 teams was good for us since it got us a lot tougher. “The Gryphon had a very difficult early season schedule. They are a division 6 school so anytime the girls play in tournaments it will likely consist of bigger schools who have more players and are probably better overall. Some of the teams the Gryphon have played in the early season have included Casa Grande, Rancho Cotate, West County High School and Sonoma Valley. These teams all beat the Gryphon but playing that type of competition tends to mold a team into who they are. It’s clear the girls are improving every step of the way. Tuesday’s game was a prime example of how much the team has improved.

“We have some girls who haven’t played a whole lot and their improvement is really starting to show,” Behrs said. “And the girls with more skill are doing a great job of keeping them involved, so I think we are on the right track if we can keep everybody healthy.”

Credo’s 56-16 win against Roseland Prep showed just how much the girls have improved. The two teams opened the 2021 season against each other back in November and Credo lost 38-31 and now just two months later they win by 40. The talk around Credo is the girls are very talented; it’s just been, “Can the team put it together?” Tuesday was a dominant performance from start to finish. The Gryphon dominated the first quarter 16-2 and never looked back.

Senior Lhasa Grey led the Gryphon in scoring with 21 points, followed by fellow senior Orieanna Vincent with 15 and sophomore Iris O’Conner scored 10. In fact, every player on the Gryphon scored, which made Coach Behrs very happy. It’s always the coach’s priority to make sure that everyone gets playing time and a chance to shoot throughout the game, so when everyone on the team scores it helps boost the morale.

“The girls did a great job of catching the ball and looking up to find the open player,” Behrs said. “We had more assists today than we have in any other game, so we were really looking for each other. We did a good job with ball movement and player movement tonight, which is one of the things we talked about.”

Behrs was also happy with how the girls battled on defense and forced turnovers.

“We’re doing a really good job of keeping our man in front of us,” Behrs said. “Our post defense still needs a little work. We have a couple tall, athletic girls, so I want them to be a little more imposing inside, so that’s going to be a point of emphasis in practice as our post defense.”

With O’Connor being 6 feet and Vincent being 5’10”, the Gryphon do have a distinct advantage over the teams they will play moving forward. Not many of them can say they have two athletic post players.

Much like the last two years, the biggest wild card is the Coronavirus. With how fast it’s spreading throughout the country now, the number one priority for the girls will be to stay safe. Coach Behrs has been impressed with the girls and has praised them for following Covid protocols and staying safe. He noted how the girls’ Junior Varsity and boys Varsity games were cancelled because of players testing positive. The girls don’t need any more setbacks, so if they can stay healthy, we could see the Gryphon go on a run to end the season

“The girls have done a really good job of following protocols, wearing their masks,” Behrs said. “But they are all friends off the court and like to hug one another; they’re kids but so far they’ve been safe.

“Looking at our schedule we have a couple tough teams that we will need to improve for,” Behrs said. “But I see us being a team who is going to be really tough to deal with moving forward. Someone will have to play a great game to beat us.”